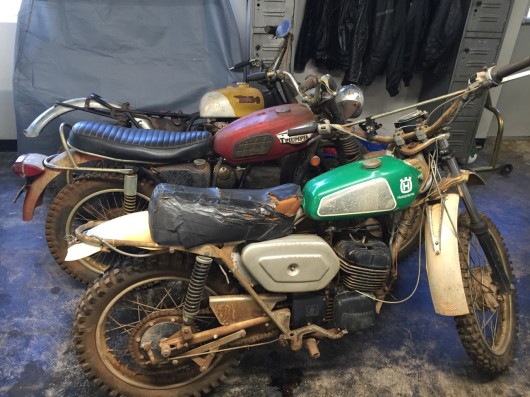 Up for sale is a set of three vintage motorcycle projects. The BSA is a late 60’s single cylinder. Stuck engine but everything is there, clean tank. The Triumph is most likely an early 70’s 250 Trophy, no engine/trans but all else is there. Clean tank. The Husqvarna is an early 70’s two stroke. The engine spins freely and has compression. We have not tried to get it to start yet. $2600 for the lot of three bikes. Feel free to email with questions or to arrange a time to see them. 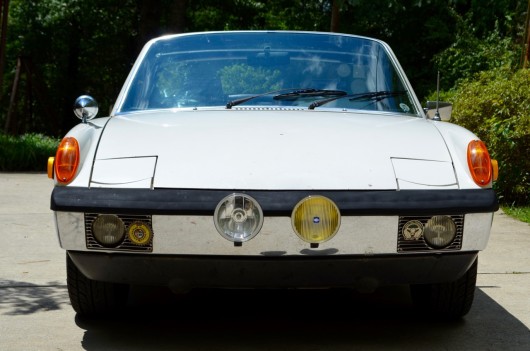 Found here on eBay is my very original 1972 Porsche 914.  I’ve been the caretaker of 914 #4722909726 for the last 10 years and we’ve been through our fair share of mountain roads and road trips. 914 09726 started life in Lander, Wyoming and then headed east to Dallas, Texas. I became its proud owner in 2007 and brought it to Athens, Georgia. The 914 still wears its original Light Ivory (L80E) paint that shows a nice patina. The original Pedrini wheels are shod with Bridgestone Potenza tires that have lots of life in them. The original black interior is in phenomenal shape considering the 44 years that it has seen.

When I bought the car it still wore its original fuel injection that will accompany the sale. I replaced it with a pair of Weber 40 IDF carburetors soon after for a bit more power. These carbs breathe into a 1.7l block that has been built out to 2.0l specs. 94mm pistons mated with 2.0l heads and a mild cam make this Type IV motor scream. The original heat exchanges are still present so it has perfectly functioning heat. At the back a new Bursch muffler lets everything exhale nicely.

914 09726 has recently benefited from an engine out service and reseal.  New piston rings, jug rings, pushrod tube seals, main seals and valve cover gaskets were installed. The valves have just been adjusted and fresh oil and filter added. This motor starts easily and pulls strongly. Triple digits on the highway are reached in a breeze yet it will still get 30mpg when driven conservatively.

The original tail shift 901 gearbox has been swapped for the newer, more precise side-shift unit. It shifts well into all five gears plus reverse and the clutch has plenty of life in it.

Rust can be a killer on these old Porsches. Due to its western origins this 914 shows very little car cancer. The floors, suspension mounts, rocker, and bottom of the firewall are all solid and don’t show any signs of rust. The beloved “hell-hole” underneath the battery tray has a 2.5” hole on the inner portion but the frame and engine support are all sound without rust. 914 09726 was originally fitted with dealer installed air conditioning. It has since been removed and the hole underneath the spare tire where the condenser resided has been patched.

The 356 and 911 craze of the last few years has put these cars out of reach for most enthusiasts. The 914 represent the last of the affordable  air-cooled Porsches. The mid-engine layout makes these cars handle like they’re on rails and its VW roots make it efficient and easy to work on. Feel free to email with questions or to arrange a time to come see 914 09726. 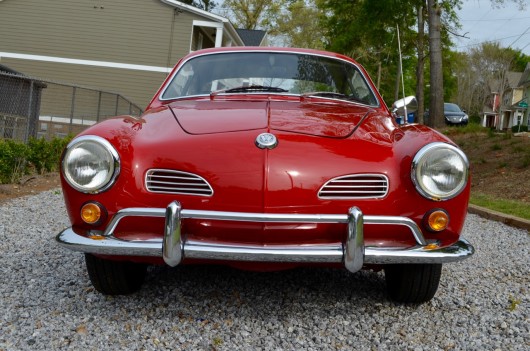 Found here on The Samba is a cherry 1968 Karmann Ghia. The car wears its original Velour Red color on a nicely restored black interior. The previous owner repainted the car and it shines nicely. The nose is amazingly straight and free of damage, which is pretty rare for an old Ghia. Underneath the heater channels, rockers and floor pans are all solid. The 1600 Dual Port motor runs great and starts easily while the transmission shifts smoothly into all four gears plus reverse. Inside the front seats have been freshly restored with new covers and padding. The dashboard and top pad are new and all of the lights and gauges function as they should. New speakers and a new Vintage Sound stereo sound great. The headliner and all of the glass are in great shape. New H4 headlights keep things bright out front and new 15 inch steel wheels and Bridgestone tires are ready to be driven. All this Ghia needs is a new owner to hop in and start cruising. Asking $13,000 obo. Feel free to email with questions or to set up a time to check it out. 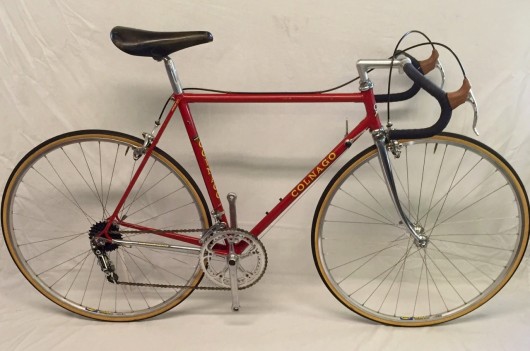 Found here on eBay is an extremely original 1981 Colnago Super. Adorned in a beautiful deep Italian red, this Columbus SL frame still retains its original paint and decals. A nice patina is present but there is no rust anywhere on the frame or fork. This Colnago features a Campagnolo Super Record groupo complete with rare Colnago pantographed Super Record brake levers. The front derailleur is the only non Super Record part on the bike being an earlier Nuovo Record piece. The groupo is in great shape and works flawlessly. Thirty-two hole Mavic Reflex tubular rims are built with DT Swiss spokes on Record hubs. The Cinelli Unicanitor saddle shows some wear in the lettering but is otherwise in good condition. It is mounted to a period correct Super Record seat post. Complete dimensions are below. Feel free to email with questions. The bicycle is in Athens, GA. Thank you for bidding. 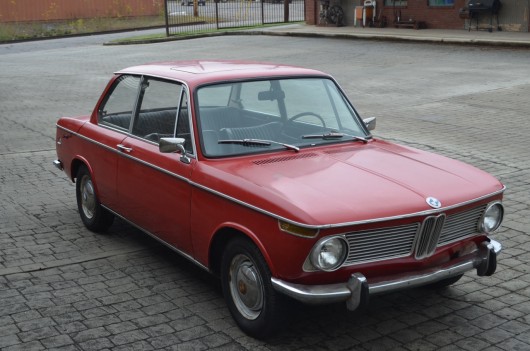 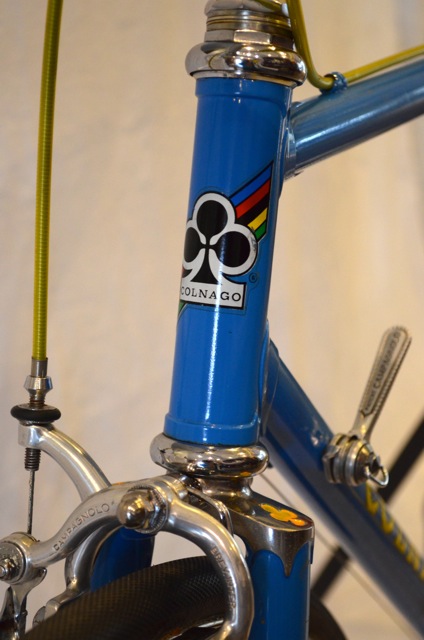 Just in time for L’Eroica California we present this gorgeous vintage Colnago Super. The Columbus tubed frame and fork are circa 1976 featuring cable guides on top of the bottom bracket shell and squared fork crown. The paint is in great shape with only a few chips (pictured). This Colnago features a full Campagnolo Super Record groupo that is in equally great shape and works flawlessly. Thirty-six hole Red Label Fiamme rims are built with DT Swiss spokes on rare Super Record high-flange hubs. The Super Record bottom bracket has been recently rebuilt along with the Specialized headset (the only non-Campagnolo part on the bike). The Colnago badged Unicanitor saddle shows some wear in the lettering but is otherwise in good condition. It is mounted to a period correct Super Record seat post. Complete dimensions are below. Feel free to email with questions. The bicycle is in Athens, GA and the buyer will be responsible for the actual shipping costs. Thank you for bidding. 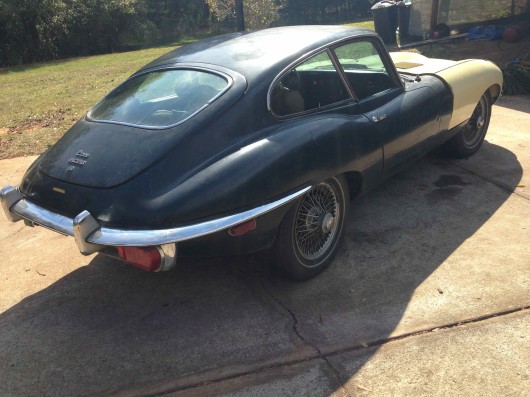 Up for sale is a ’71 Jaguar E-type coupe and a plethora of spare parts. The E-type is complete with very little rust. The engine turns and it rolls but has not been run in a while. Several interior parts, knock-offs and body panels are available along with a pair of Coupe bodies. See the pictures in the post and feel free to inquire about individual or package prices. 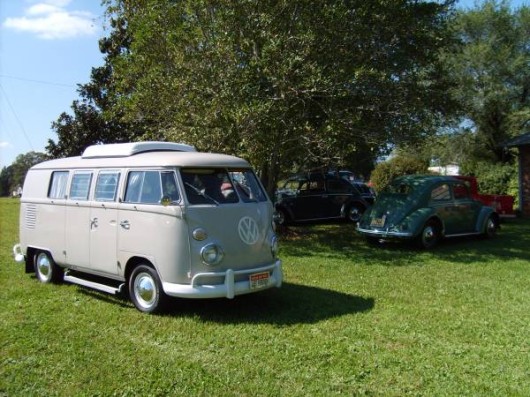 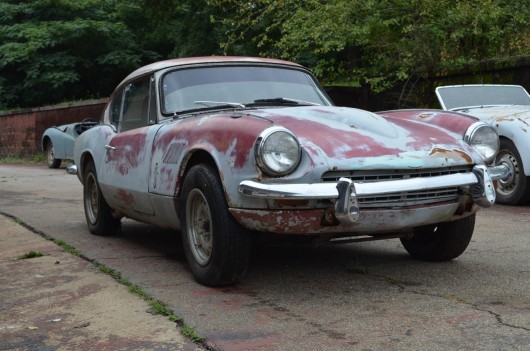 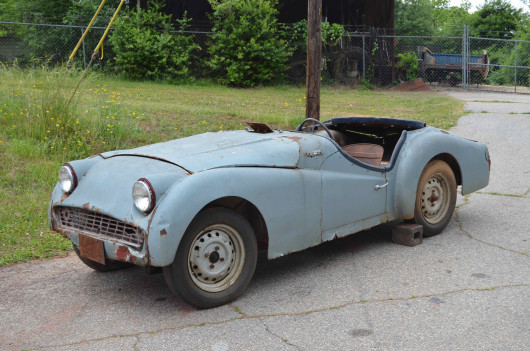