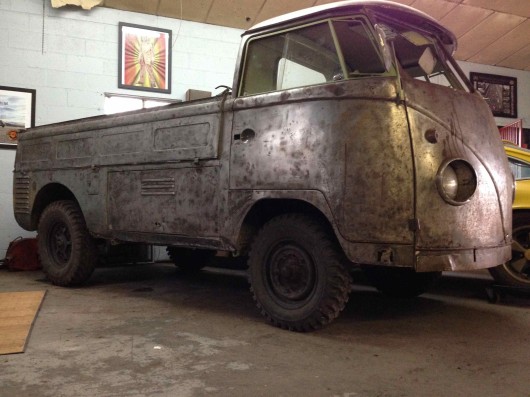 Up for sale on The Samba is a ’58 Single Cab Splitty project. This truck is remarkably sound and ready for a restoration. The previous owner media blasted the truck from stem to stern so there’s nothing to hide. The truck is equipped with period offroad goodies including coil-over front shocks and air-adjustable rear units. The rear wheel arches were cut to accommodate oversized knobbies but the original steel road wheels and tires are included.

The original engine is long gone but a 1600 dual port that is out to rebuild (it turns freely) is included. The truck bed is solid as are the rear floor pans. The front pans have been patched however new pans are included. Other new panels include a pair of jack points, a new lower nose panel and driver’s side rocker.

The front and rear glass along with the tail lights and turn signals are gone.

Rebuild the engine, add a set of Safari windows and clear coat the body to have one tough shop truck or start a ground up restoration without having to guess at what lurks beneath old fixes and resprays. 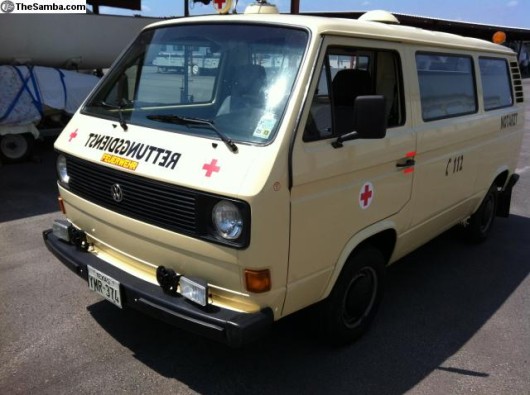 Imagine picking the kids up from school in this Vanagon. Up for sale on The Samba is a 1980 Transporter (Vanagon to us) Ambulance imported from Germany. The owner claims it to be a factory built ambulance complete with sliding stretcher, high/low German siren, Hella blue roof light and a bunch of other specialty goodies. This bus is in Austin, TX and has been registered in the US so transferring to another state shouldn’t be a problem. Find is at the above link for $6,000. 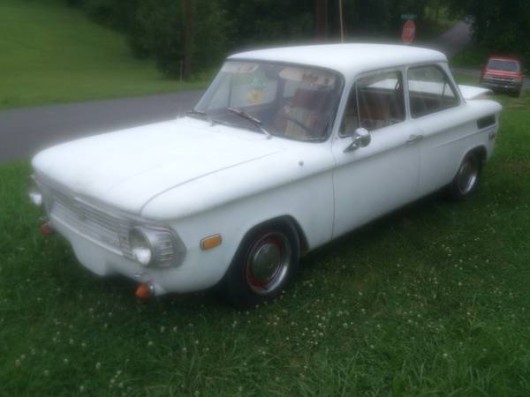 This is rare to see on our shores but up in the hills of North Carolina we’ve come across this 1970 NSU 1200. 1970 marks the first full year after NSU was taken over by Volkswagen and folded in with DKW and Auto Union to produce Audi. The 1200 was a rebranded Type 110 and shared much of the same mechanicals. The 1177cc air-cooled straight four cylinder engine boasts 54hp and is mounted transversely in the rear. We doubt that the stinger style tailpipes are stock but without bumpers we see rally potential all over this one. Find it on Craigslist in Hickory, NC having just been reduced from $2500 to $2000.

**Update** July 31, 2013. A friend of the shop went to look at this camper over the weekend. The c/o has not had it on the road yet. Although it does crank and run it has a fair amount of rust at the body seams and around the power and water pickups. Be sure to make a good inspection of this one if interested.

Here’s an ’84 Westy that may have some potential. The body looks straight and the cabinets and canvas top look clean. Its an automatic which isn’t ideal for these busses but for $2800 it may be worth overlooking. Find this one in Bishop, GA. 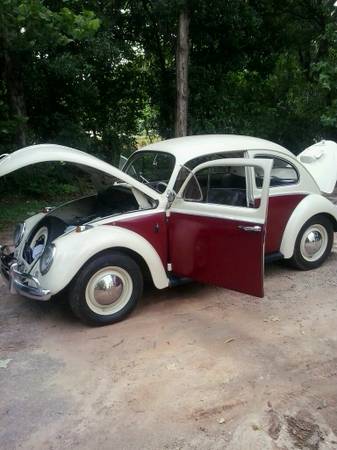 This ’64 Bug was found on Craigslist in Stone Mountain, GA just outside of Atlanta. It was listed for a reasonable $3500 yesterday but upped to $5000 today. We like the look of  pre-’67 bugs with contoured fenders and glass covered headlight assemblies. This one is said to have been converted from 6 to 12v and in “working” condition.