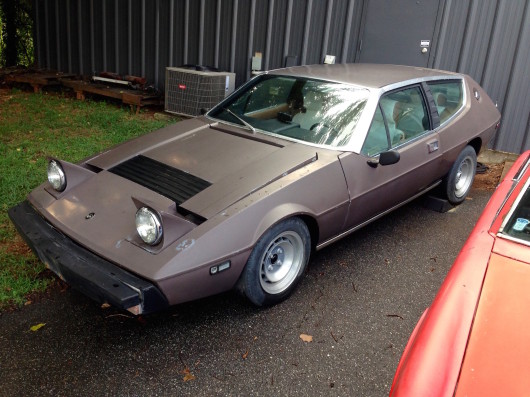 Founds here on eBay is this complete 1974 Lotus Elite project.

Up for auction is an icon of the 70’s! Adorned in its original disco brown is this fantastically cool ’74 Lotus Elite. Colin Chapman had six Formula Once constructor championships by the time this second generation Elite hit the road. With it’s radical looks, 2+2 seating and the same 2.0 liter twin cam 907 engine that ultimately ended up in the Esprit the Elite was the most expensive four cylinder car in the world at its time of release.

This particular Elite was originally purchased in the Northeast by a buyer from Seattle. Lotus didn’t have a West Coast distributor at the time so a cross country purchase was necessary. I have stacks of records tracking this cars maintenance history up until it moved to Tennessee around 2004. The next owner parked it running and driving in a carport in early 2005 when the timing belt interval came due. Not being able to find anyone to work on the car it sat for 10 years until I brought it to Georgia. The engine turns freely and the transmission engages in all four gears plus O/D and reverse. The fiberglas body is in good shape although the paint is faded. The only crack is next to the passenger side headlight. The wishbone frame looks to be in good shape with no visible rust. Unfortunately during its tenure in Tennessee rodents moved in and had their way with some of the wiring. The Lotus does not run. The wiring will need to be addressed before it can be started although being a 40 year old British car this probably isn’t a bad thing. The interior is complete less the headliner but the seats will need to be reupholstered. Everything is here to make a great project. I have several spare parts to go along with it. The Lotus will need to be trailered.

Feel free to email with questions or to arrange a time to come and see it.

The car is in Athens, GA.