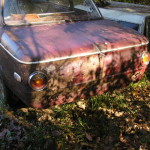 This 1600 was purchased from the original owner who took delivery of the car in Massachusetts in the fall of 1968. The original 1.6l engine was swapped to a 2.0l unit from a ’74 2002 in the late 90’s with the rest of the car remaining completely stock. We like the low-back seats, euro indicators and lack of federally mandated reflectors and trim that these early cars feature. So far we’ve done brake and cooling system work as we get her ready to be back on the road. Next up will be rust repair, tuning, exhaust and a pair of sidedraft Webers to let her breath a bit easier.